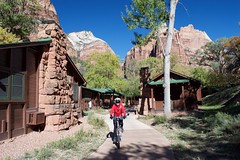 After the Death Valley bike tour with Bicycle Adventures, we decided to extend the trip by driving north to Zion National Park for a few days of hiking and riding. On the last day of the bike trip we were dropped at the Las Vegas airport. I took the shuttle to the rental car center to pick up our Hundai Santa Fe SUV while Kerie got the bikes ready. I eventually found my way back to Terminal 3 to pick up Kerie, the luggage and the Bike Fridays that we quick folded after removing racks and fenders.

The drive to the park took us around 3 hours with a brief stop for Subway sandwiches at a gas station in Mesquite. We arrived around 10:30 p.m. and checked into room 522, a four-plex cabin. With few lights in the area, the stars were incredibly bright against the black sky.

Up early to walk and take some time exposures before the sun rose above the surrounding mountains. Breakfast at the lodge of veggie omelet and toast. Today we planned take a leisurely bike ride through the valley. We encountered a lot of car traffic on the ride to the end at The Narrows trailhead. Private vehicles are not allowed in the park from mid March to November. This was only the second weekend when cars were allowed in the park plus it was the long Memorial day weekend. The parking areas were full of cars and we were glad to be on our bikes except for when motorists passed us a little close.

At the end of Zion Canyon Scenic Drive, cars were parked everywhere, and lots of people had rented waders and shoes and walking sticks for their hike through the Narrows. Our bikes were some of the few parked in the racks.

We walked to the start of the Narrows trail, taking lots of photos along the way. Watched the prepared and unprepared hikers start their trek up the narrow canyon, wading in the Virgin River. There were some cold hikers in shorts and tennis shoes. At the bike racks we met a very nice couple from Bend, Oregon, having retired there from Colorado. Bend is a popular retirement destination with great outdoor activities year round. The couple had circa 1985 Stumpjumpers, with lugged frames; they had been offered good money to sell them. The bikes were their get-around-town bikes that they put on the back of their RV for short trips from camp, outfitted with fenders, racks and wide tires. Stumpjumpers were the first mass-produced mountain bikes, so their bikes were likely collectors items.

On the ride back to the cabin we stopped at the Weeping Rock to walk the short 1 mile trail to the rock wall; more photos and one of us taken by a nice Indian woman at the wall.

We hadn't planned to be gone so long on the first part of our trek, getting back to the cabin around 2pm. Not wanting to spoil our dinner, we snacked on energy bars for lunch. Friends had recommended The Spotted Dog Cafe for dinner so we made an early reservation. The baked trout with rice, broccoli, and ginger carrots was delicious, accompanied by a Spotted Dog Ale.

SOL Food is a good local market where we bought cheese, a baguette, energy bars and drinks for lunch the next day.

The neighbor in the adjoining room was stomping around for what seemed like hours. We are in room 522. Read a good interview with Stephen King. He was addicted to cocaine and booze for many years, writing in the morning and revising in the afternoon. When asked how do you write a book someone wants to read? he quoted Elmore Leonard as saying "Leave the boring stuff out." King said that using your imagination is difficult but addicting. He will force himself not to write for an extended period (week or two) to rekindle his interest.

Friends had also recommended hiking to Observation Point. They said it might be less crowded than the Angels Landing hike and had incredible views. The busboy at the hotel who saw us looking at three panoramic photos in the dining room of views from Observation Point, the Cable, and Angels Landing confirmed that assessment, saying it was his favorite hike.

After another breakfast at the lodge we packed our supplies for the hike and rode the Bike Fridays to the trailhead, locking our bikes to the racks at the base. By 10:15 or so the parking lot was full.

We had a cautious start since Kerie thought her new hiking boots might be a bit too tight. There were few people on the trial. Not long after we started we saw a large buck walking toward a group of us hiking, which including a hearing aide dog. Once we moved back a bit it could access a gentle slope to continue his browsing.

The weather was cool with brilliant sun. It took a while for the sun to rise above the adjacent peaks as we hiked up toward the sunny slopes, shedding our layers along the way. It was an almost perfect day for hiking, with breathtaking views along most of the route. The middle section of the hike was through a narrow canyon.

Near the top we hugged the inside cliff wall to avoid getting near the edge and a long, long drop off. We had to concentrate to avoid tripping. We had reached the elevation of Observation Point which was within sight but still about a mile away so we chose to stop for lunch at a wide spot on the trail overlooking Angels Landing and the valley below. Ravens occasionally soared overhead. I took this somewhat distorted panoramic photo with the iPhone showing the trail in both directions:

Several runners passed us on their way to the Point when we stopped for lunch and a short while later they passed us again on their way down as we started our descent. We were surprised by a mother with an infant in a sling on her front, with a backpack, and walking sticks.

I took more photos on the descent with different light conditions. We rested for a bit on a bench at the base of the climb then rode toward the Visitors Center at the park entrance which turned out to be too far away if we were to make it back in time to check in for our Southwest flight. Since there is no assigned seating we wanted to get an early boarding position by checking in precisely 24 hours prior to the flight.

We did ride to what we called photographer's bridge where a pack of photographers were awaiting just the right light conditions to catch a view of the sun glinting off the Virgin River, the yellow leaves of the cottonwood tree, and mountains in the distance, a classic view that we later recognized as the image on our room keycard. There must have been at least 10 serious photographers with expensive gear jostling for position on the bridge.

Rushed back in time to check in and print boarding passes on the lodge's shared computer. We reluctantly packed our bikes for the trip home the next day.

Out again early around 6:30 for a short walk and photo of two bucks and two does. This is rutting season and the larger of the two bucks was intently following the does and chasing the other buck away. After yesterday's disappointing breakfast, decided to have the buffet with eggs, potatoes, pancake, granola, yogurt, milk, fruit, and cottage cheese. Our 3pm flight would make it difficult to get good meals later. Discovered that starting tomorrow the Zion lodge winter package deals begin which include a free breakfast.

Loaded up the car and started our journey back to Vegas. Stopped for a photo at the Throne of the Patriarchs then turned west toward the long tunnel where bikes are banned. Were stopped for an oversize vehicle and expressed our disappointment about the ban which kept us from riding that road. There are two park employees stationed at each end of the tunnel to facilitate passage of larger vehicles, a common occurrence. Why not do the same for bikes, or at least let them pass with the larger vehicles. Before the tunnel we saw a couple from France touring from Vancouver to Baja. They had hitched a ride through the tunnel with their bikes in a pickup. We told them about the two women we saw in Death Valley who were also biking to Mexico.

A few miles beyond the tunnel was Checkerboard Mesa, where we decided to turn around and head back to Las Vegas. On the way we stopped again at photographer's bridge for another photo with different lighting conditions. Zion is a photographer's dream, with spectacular views throughout the park.

There is a huge parking lot at the Visitors Center where most people park when the shuttle is running during the summer and now on the weekends. Bought postcards and a vintage park poster calendar. After gassing up we continued on to Vegas, averaging around 75 mph on I-15. I dropped Kerie and the luggage at Terminal 1, then returned the car and shuttled back with plenty of time to check our bags and get through security.

Even though we were only at the park for a short visit, it was well worth it. I hope to return.